An American Impressionist, Bower was born in New York, studied at the Pennsylvania Academy of Fine Art, and was living with his wife in Cliff Island, Maine by 1914. Despite his urban upbringing, the coast and the sea fascinated Bower. A large portion of his paintings are seascapes, particularly scenes depicting the coast of Cape Elizabeth and Cliff Island, Maine.

Bower was a member of the Salmagundi Club, the Philadelphia Watercolor Club, and the Boston Society of Watercolor Painters, as well as being an associate member of the National Academy of Design.

He exhibited at the Carnegie Institute, the National Academy of Design, the Art Institute of Chicago, and the Pennsylvania Academy of Fine Art.

His works are in the collection of the Springfield Art Museum, the Butler Art Institute, the Sweat Memorial Art Museum, the Portland Museum of Art, and the Farnsworth Art Museum in Rockland, Maine. 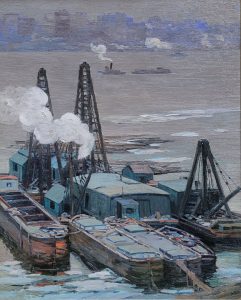