Marine painter and etcher Lemuel D. Eldred was born and raised in Fairhaven, Massachusetts near New Bedford’s whaling community. He studied for a short time at the Academie Julian in Paris (1880) and traveled throughout Europe (1883) but he claimed he was self-taught. He exhibited in Boston and at the National Academy in 1876. His work is represented in the Peabody Museum of Salem, MA, the Old Dartmouth Historical Society and the Kendall Whaling Museum.

Little is known of Lemuel D. Eldred’s life. His work typlifies the late Hudson River School painters’ moral standards and natural views which were popular after 1825 until 1875. In 1876 he moved to Boston where he kept a studio and he became a sought-after, popular marine painter. 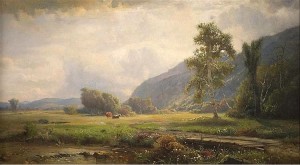