Of Scottish descent and born in Oxford, England, Hamilton Hamilton became a renowned American landscape and portrait painter and illustrator. He traveled widely, which meant that his landscape subjects included France, England, the American West, and the states of New York and Connecticut where he was one of the founders of the Silvermine Art Guild in Norwalk.

Hamilton Hamilton emigrated with his family to Cowlesville, New York, a rural community near Buffalo, when he was a child, but he spent most of his life in Connecticut except for a few years around 1910 when he lived in Pasadena, California for his health.

He was largely self-taught and pursued his artistic talents in spite of his parents’ lack of encouragement. However, in 1870, they financially supported his travels to Europe including France, where he studied in Paris.

After two years, he was forced to return home to help support his family, which he did by opening a portrait studio in 1872. The next year he made a sketching trip West to Colorado and spent much of the summer and winter there, completing forty-seven paintings, some of them shocking to viewers who perceived an indiscriminate piling on of color, likely influenced by Impressionism. Hamilton Hamilton continued painting in New York State, but his Colorado paintings stood out as being unique and were chosen as entries at the 1876 Centennial Exhibition in Philadelphia.

In 1878-79, Hamilton Hamilton returned to France where he painted in the art community in Pont-Aven, Brittany with painters who identified with the Barbizon School and the revolutionary plein-air method of painting. In 1879, he returned to the West, painting more landscapes.

In 1881, he moved to New York City, and he rented space at Sherwood Studios on West 57th Street where his friends were Thomas Moran, Robert Blum, Winslow Homer, William Merritt Chase and Birge Harrison.

By 1889, he was a full member of the National Academy of Design, and this same year he had twin daughters born. One of them, Helen, trained by her father became a recognized post-impressionist landscape painter.

In 1895, Hamilton Hamilton was in England, painting along the Cornish Coast. Returning to New York State, he painted on Long Island and in Peerskill, New York. In the mid-1890s, he became active in the artist colony of Silvermine, a town between Norwalk and New Canaan, Connecticut. Sculptor Solon Borglum was highly active in the leadership there and hosted discussions in his barn studio. Following Borglum’s death in 1922, Hamilton became one of the founders of the Silvermine Guild of Artists.

In 1910, Hamilton Hamilton and his family moved for a period to Pasadena, California because of ill health. There his palette lightened, and this influence remained when he returned to Silvermine. He suffered financially in the later years of his life because his style did not conform to increasing taste for modernist work. 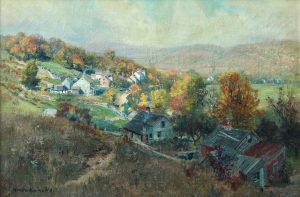