J. A. Hekking was a versatile and talented landscape painter who lived in New York and Connecticut and was active from the early 1850’s to the later 1870’s.  Hekking was a frequent participant at major exhibitions. His paintings were inspired by the Adirondack and White Mountains, Connecticut, New York views, and the Jersey shore.  He worked with Frederick Rondeland.  His paintings were actively acquired by important collectors including J.S. Farrand, Sarah Holderby, N.L. Lindsey, T. Foster, and George Watter Vincent Smith.

Hekking exhibited at the National Academy of Design (eight paintings between 1859 and 1875); the 1865 Michigan State Fair; the Crystal Palace in New York, 1853; Cosmopolitan Art Association, 1858; Utica Art Association, 1868; Buffalo Fine Arts Academy, 1869; Boston;1869; the Buffalo YMCA, 1861 and the Chicago Industrial Exposition in 1876. Hekking is listed in the exhibition records of the National Academy of Design, the Pennsylvania Academy of the Fine Arts, and the Groce and Wallace New York Historical Society Dictionary of Artists in America.

He is in the following books: 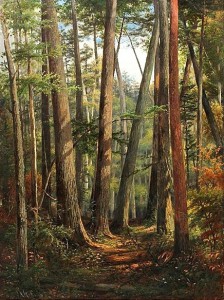