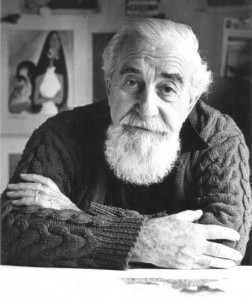 Al Hirschfeld became famous for the pen and ink renderings he did as Theatre Caricaturist for The New York Times. He earned 23 awards including a special Tony Award in 1984.  His work also appeared in other newspapers and books, and in 1996 a film documentary of his life titled The Line King, was nominated for an Academy Award. That same year Hirschfeld was named one of six New York City Landmarks by the New York Landmarks Conservancy.

He was a familiar figure at first-night openings and rehearsals, and he perfected a method of making a sketch in the dark. To be one of his subjects was regarded as a special honor, and feelings of triumph often were felt by his followers who found the word “Nina” in his work. Nina was the name of his daughter, and he would hide the name in the lines of his caricatures.

Hirschfield was born in St. Louis.  He moved with his family to New York when he was 12 years old, and studied at the Art Students League. At age 18, he became an art director for David O Selznick, the motion-picture producer, and then moved to Warner Bros.  In 1924, he went to Europe and in Paris attended the Academy Julian where he studied painting, sculpture, and drawing. During a trip to Bali, where the intense sun bleached out all color and “reduced people to walking line drawings” as he later said, he developed his life-long interest in drawing.