John Inglis was born in Dublin, Ireland in 1867.  He studied at the Dublin Academy, and at the Ecole des Beaux-Arts under Jean-Léon Gérôme.  At the Académie Colorossi his teachers were Raphaël Collin and Gustave Courtois.

Inglis settled in Rochester, New York, where he was active in the Rochester Art Club, and served as president.  He taught at the School of the Mechanics Institute.

With his academic European training, Inglis was regarded as a learned senior painter. His basically conservative style included elements of Impressionism.  At the Art Exhibition of the Rochester Industrial Exposition in 1925, Inglis won a gold medal.  For his genre scene, A First Sledding, Inglis won a silver medal at the same show five years later. The Memorial Art Gallery of the University of Rochester has his Old Homestead.

Inglis was honored with a one-man show in the fall of 1939, and he was one of the founding members of the Rationalists, self-declared “liberal-conservatives,” who wished to uphold “logic and order” in the Fine Arts.  Inglis was active in exhibiting his works at Brodhead Gallery in Rochester. 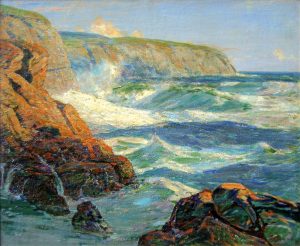