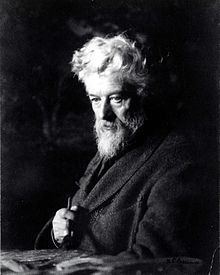 Brought to New York City in 1850, William Keith was apprenticed to a wood engraver in 1856 working for “Harper’s” magazine. In 1858 (or 1859) he visited California for “Harper’s” and then after a trip to Great Britain, settled in California as an engraver in 1862. He began exhibiting paintings in 1864 in San Francisco where he opened his studio, after having been taught painting by his wife.

The Northern Pacific Railroad commissioned him to do landscape paintings along its route about 1868. In 1869-70 he studied in Dusseldorf, Germany; in 1871-72, he shared a studio in Boston with William Hahn; and in 1872, he returned to California. A nature lover, he found there was “scarcely a mountain in three-fourths of California where he had not kept vigil for days as a time, studying every detail of color, flower, rock, forge, shadow, and sunshine.”

Keith became Thomas Hill’s rival in monumental landscapes, saying, “I’d be satisfied if I could reach the power and success of Tom Hill.”

When George Inness visited California in 1890, he worked in Keith’s studio for many weeks, and they made sketching trips together. The result for Keith was an influenced style reflecting the subjective rather than the spectacular. His “Majesty of the Oaks” painting sold at auction in New York City in 1903 for $2,300., and about the same time “Glory of the Heaven” sold at auction in San Francisco for $12,000.

Of medium height with unruly curly hair, Keith had his studio next to the live oaks on the Berkeley campus where it was the center of the university-oriented California culture. The 1906 earthquake and fire destroyed 2,000 of Keith’s works.

Resource:
Peggy and Harold Samuels, “Encyclopedia of ARTISTS of THE AMERICAN WEST”