Georgina Klitgaard, born in Spuyten Duyvil, New York in 1893, was a very successful painter, muralist and etcher who was friendly with artists Julian Bloch, George Biddle and Eugene Speicher. She studied at the National Academy of Design and Barnard College in New York City.

Klitgaard’s work has a subtle folk art primitivism combining with expressiveness full of personal symbolism. In her tiny snowy landscape “Bearsville School, New York,” only 8 by 10 inches, children play underneath a scraggly tree with the white schoolhouse seemingly startled behind it. The sky is very mystical, which could lead the viewer to believe they are not dealing with your average realist.

Klitgaard won awards from Carnegie Institute, Pittsburgh; Pennsylvania Academy of the Fine Arts, Philadelphia; the Pan American Exposition; and San Francisco Art Association, among others. She also received a Guggenheim Fellowship in 1933.

She exhibited year after year at Carnegie Institute, Pennsylvania Academy of the Fine Arts, Corcoran Gallery of Art, Washington, D.C., Virginia Museum of Fine Arts, Richmond, and others. She painted Depression-era Works Projects Administration murals in post offices in Pelham, Georgia, and in New York in Goshen and Poughkeepsie, the latter a difficult, elongated composition of the town and Hudson River in 1840, based on a Barber and Howe woodcut.

Klitgard was a member of the Audubon Artists and American Society of Painters, Sculptors and Gravers. Her work is in the collections of the Whitney Museum of American Art, Brooklyn Museum and Museum of Modern Art in New York City; Wood Gallery of Art, Montpelier, Vermont; Dayton Art Institute, Art Institute of Chicago and Toledo Museum of Art in Ohio.

From Jules and Nancy Heller, “North American Women Artists of the 20th Century” 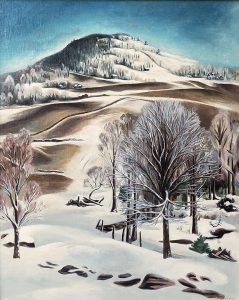