Louis Aston Knight, renowned in both France and the United States for his vigorous plein-air landscapes, was born in Paris in 1873. He was the son of Daniel Ridgway Knight, the celebrated American expatriate artist who specialized in detailed, crisply drawn renderings of French peasant life.

Louis Aston Knight spent his boyhood years in Paris. He later attended Chigwell School in Essex, England, where he received his basic education. Intent on pursuing a career as an artist, he began his formal studies in his father’s atelier. Following this, he enrolled in classes at the Académie Julian, studying figure painting under Jules Lefebvre and Tony Robert-Fleury. From his father, he inherited a love of outdoor painting as well as a direct, unidealized approach to nature. In his mature work, he successfully combined both of these tendencies with his lifelong concern for the reflections and movements of water (indeed, he is known to have once rented an old mill near Beaumont-Le-Roger in Normandy, just to study the water effects of the brook that ran through the property). In addition to views of the French countryside, Knight painted numerous garden subjects, many of them depicting the grounds at the Manoir de Chautereine, at Beaumont-Le-Roger, where he once lived.

As a resident of Paris, until his later move to New York, Louis Aston Knight participated in important exhibitions in France and throughout Europe. He was awarded a bronze medal at the Exposition Universelle in Paris in 1900 and honorable mention at the Paris Salon of 1910. He subsequently received gold medals at Rheims, Cherbourg, Geneva, and Lyons and the salons of 1905 and 1906. Knight was also a member of the European Chapter of the American Artists Professional League, the American Club of Paris, the Cercle de l’Union Artistique, and later, the Metropolitan Club of New York. After moving to the United States, he painted the landscape around Old Mystic, Connecticut, as well as the Maine coast, and Canadian salmon rivers.

Louis Aston Knight died in New York in 1948. During his years in France, many of his works were purchased by the French government and now hang in the collections of the Luxembourg Museum and the Ministry of Foreign Affairs. His work was also eagerly sought by contemporary private collectors, including Presidents Tardieu and the Sultan of Morocco. In America, examples of Knight’s work can be found in the collections of the Heckscher Museum, Huntington, Long Island; the Hudson River Museum, Yonkers, New York; the Mattatuck Museum of the Mattatuck Historical Society, Waterbury, Connecticut; the Memorial Art Gallery at Rochester, New York Musées Nationaux, Paris; Newark Museum, New Jersey; Ohio Historical Society, Columbus; the Parrish Art Museum, Southampton, New York; the Toledo Art Museum, Ohio; and Washington County Museum of Fine Arts, Hagerstown, Maryland. 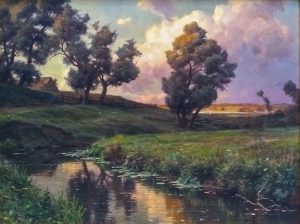