Born in Halle, Germany in 1880, Max Kuehne was a colorist who created cheerful landscapes that appear to be painted spontaneously and with freshness.

He studied with William Merritt Chase and Kenneth Hayes at the Chase School in New York. In 1910, he embarked on a bicycling trip, traveling through England, France, Germany, Holland and Belgium. To support this trip he did portrait commissions along the way.

When he returned to New York City, he set up a studio in Greenwich Village and was a student of Robert Henri from whom he learned a dark impressionist style. He also became close with such avant garde artists as Guy Pene du Bois, William Glackens, William Zorach and Maurice and Charles Prendergast, which also influenced his dark work including street scenes and docks in New York City. However, three years in Spain, and painting trips to Gloucester lightened his palette as did time in Paris where he was much influenced by the Fauves, Nabis, and decorative painters. By 1912 he was producing work that would make him known as a “colourist of great distinction” by producing “paintings full of sparkling sunlight.”

He became a member of the artistic community later in Rockport, Massachusetts, with Gifford Beal, Leon Kroll, Paul Manship, Edward Hopper and Jonas Lie. Many of his finest paintings done later in his career are of the busy harbors and piers of Gloucester and Rockport.

His work was widely exhibited including the National Academy of Design, the Art Institute of Chicago, and the Carnegie Institute in Pittsburgh. 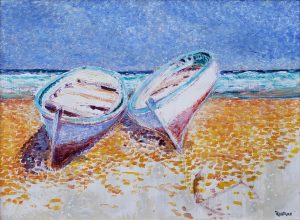