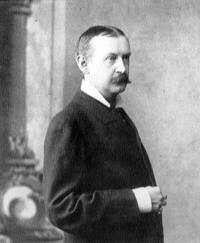 Edmund Darch Lewis was born in Philadelphia, the son of a prominent businessman. According to family tradition he was educated at a private school and studied painting with the German-born landscapist Paul Weber. He first exhibited at the Pennsylvania Academy of the Fine Arts in 1854, where he was elected an associate in 1859 and a full Academician in 1862. He also exhibited at the Boston Athenaeum from 1858 to 1869, and the National Academy of Design in New York in 1860.

Lewis never married and lived a comfortable existence with his parents up to the age of fifty. The large, detailed, and romantic landscapes that he painted between 1860 and 1876 reflect the influence of his famous contemporaries Frederic Edwin Church and Albert Bierstadt.

Lewis was a prolific artist whose views of Pennsylvania, New York, and New England were avidly collected by Philadelphia art patrons, and by the early 1880s he had amassed a fortune. He devoted the last thirty years of his life to amassing a huge collection of fine and decorative arts that he displayed in his sumptuously furnished townhouse on 526 South 22nd Street.