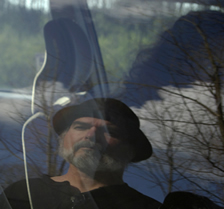 Fernando Llosa was born in Arequipa, Peru, to parents who had a taste for original art on their walls and extended dialogue at the dinner table. After high school and at the tender age of 16, Fernando was sent off to pursue university studies in the United States with a full scholarship granted by Loyola University in Chicago.  Having earned a BA in Sociology with minors in Philosophy and Theology, he next traveled to Paris and studied French for a few months before moving on to do post-graduate work in Communications at the University of Louvain, this time with a scholarship granted by the Belgian government.

In 1969 Fernando returned to South America, now married to an American woman he met in Belgium. During the next 20 years he helped her raise three children, and worked in the design and implementation of projects for the social and economic development of very poor urban and rural communities. Despite his family obligations and an extremely heavy workload, he also managed to formally exhibit photography, drawing or painting at least once every year.  Towards the end of this period he was living in Montevideo, Uruguay, working for an international organization implementing projects in fifteen different countries. The geopolitics affecting Latin America had changed drastically during the 1980’s, and a terrible wave of right wing repression was gradually making impossible the type of human rights and social and economic development work Fernando was doing.  Field workers in whose training he had participated and whose salaries he helped fund were being brutally persecuted and sometimes tortured and killed.

In 1990 Fernando migrated to the U.S and took up permanent residence in Ithaca, in the Finger Lakes region of New York state.  He has spent the last 17 years writing and making and exhibiting art, most of them in company of fellow artist Kim Schrag.  Peter Jung Fine Art in Hudson, NY,  and the Oxford Gallery in Rochester, NY represent Mr. Llosa’s painting.  Home Green Home in Ithaca, NY represents his photography and his work with stone.