Bela Mayer, landscape painter and textile designer, was born in Loeche, Hungary, 1887.  It is not known when he immigrated to the United States; however he enrolled at the National Academy of Design in New York City in 1908.  For the next seven years he would study art there under the tutelage of C. Y. Turner, Ivan Olinsky and E. Ward.

After finishing his schooling, Mayer moved to Long Island, and would stay in the New England area all of his life.  He visited Gloucester and other locations on Cape Anne, Massachusetts.

Sometime during the 1940s, Bela Mayer added the Peter to his name in order to distance himself from female artists with his same first name.  Though he changed his name, his belief that “balance is the most important element in a painting” never wavered; he was quoted saying this at a showing of his work in Roslyn, New Jersey in 1984.

His Impressionist paintings combine the organic lines of nature perfectly with the more structural and geometric lines of man in a non-abrasive, harmonious manner.  He spent his time outdoors painting towns along the Hudson and around his home in Long Island. 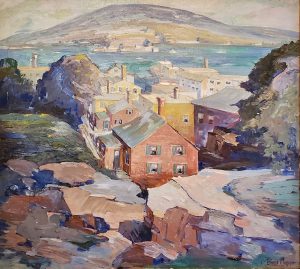