Professor Kiar Mesko was born in 1936 in Slovenia, Europe.  He got his diploma from the Art Academy in Slovenia and the Fine Art Hochschule fur Bildende Kunste, West Berlin Germany.

From 1970 – 1985 he was the youngest Dean and Professor of Painting and Graphic Prints at the Art Academy in Slovenia. He has exhibited throughout Europe, Japan, Egypt and at the MOMA in US and has received numerous international awards for his work. Kiar Mesko is known for his classical figurative old masters oil paintings, graphic print art as well as marble, bronze and granite sculptures. His granite sculpture monumental work is displayed in city squares and on prominent buildings in Europe. Kiar’s oils and prints can be found in various galleries, museums, and numerous private, public and corporate collections worldwide.

Exhibition Record (Museums, Institutions and Awards):
Kiar Mesko’s art piece titled “The Narrow Pass”, 1971 was presented as a Gift to 39th Vice President of the United States Mr. Spiro T. Agnew by Marshall Josip Broz Tito, President of the Socialist Federal Republic of Yugoslavia. The Art- Gift is in permanent collection at the National Gallery Of Art in Washington, DC.

Biography from the Archives of askART 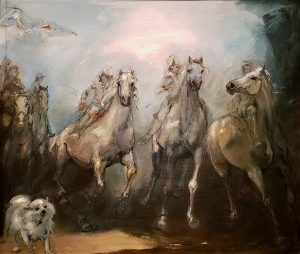