Known professionally as George Milo, he was a painter, set designer, set decorator, and art director whose extensive television and film credits span the decades from the 1940s through the 1970s, and include a long and illustrious association with director Alfred Hitchcock.

He was nominated for three Academy Awards in the category of Best Art Direction for his work on the films Psycho (1960), Judgement at Nuremberg (1961), and That Touch of Mink (1962). 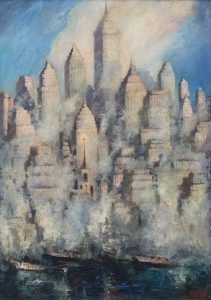