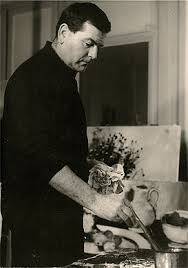 Gaston Sebire was born August 18, 1920, in Saint-Samson Calvados. He was a painter of landscapes, seascapes, still lifes and flowers. Sebire was also an engraver, pastel artist and painter of theatre decorations. He settled in Paris in 1951. In 1953 he created the costumes and decorations for l’Ange Gris, with music by Debussy, for the Ballets of the marquis de Cuevas.
He lived and worked in Normandy and participated in numerous group exhibitions, including: Salon of Independents, Paris Salon of Tuileries, Paris Comparisons Salon since 1962, Paris Salon of French Artists since 1964, Paris. He appeared at other groupings in London with Lorjou and Clave, in Munich, Washington, Japan, and different exhibitions of the School of Paris at the Charpentier Gallery in Paris in 1953, 1954, a1955, 1956, 1946, 1958 and 1962, at the Biennial of the Jeunes au Pavilon of Marsan in 1957.

He received the Critic’s Prize in 1953, the Greenshields Prize in 1957 and the Gold Medal at the Salon of French Artists in 1968. Today his work can be seen in Museums around the world.