He was born in Greenwich, New Jersey, a town on the Delaware River below Philadelphia, which has been associated with ships and shipping since the earliest Colonial times.  His father was a sea captain and the young Sheppard took many voyages with his father to make artistic studies.  He learned perspective drawing at Cooper Union in New York City in addition to his studies with de Haas.  In 1879, he spent four months sketching Mediterranean port cities including Gibraltar, Genoa, Naples and Messina in Sicily.  Between 1888 and 1893, he also studied painting in Venice and Paris.

By the time he was in his mid-thirties, he had established himself as a successful illustrator and painter.  The yachts he painted were the most lavish of his day, owned by the wealthiest of men.  He was an expert in the design and rigging of ships of present and earlier times.  His work was highly regarded for its authenticity as well as its artistic merit.

Sheppard was also an expert navigator and sailed a number of famous yachts in races.  Twice he was to command Tamerlane when it won the New York to Bermuda run.  His book, Practical Navigation, was used for many years by the United States Naval Academy.  Though he retired from the sea, Sheppard continued to paint until his death in Brooklyn, New York in 1937. 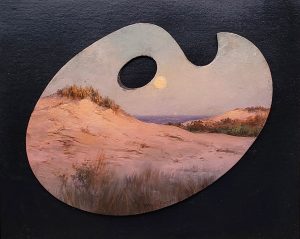