Thomas Lochlan Smith was born in Glasgow, Scotland, and emigrated to America at an early age. He studied with George H. Boughton in Albany, New York, and had a studio there for several years before moving to New York City. He exhibited frequently at the National Academy of Design, New York City, and was elected an Associate Member of the Academy in 1869. His work was shown at the Boston Athenaeum in 1866 and 1868 and at the Centennial Exhibition of 1876 in Philadelphia. Smith was noted for his winter scenes. 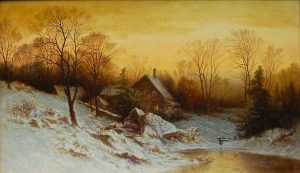