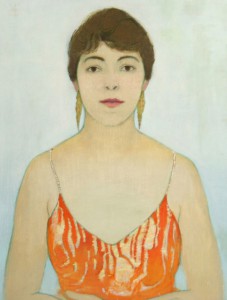 Born in Olney, Illinois, Eda Sterchi was a landscape and genre painter who worked in the Midwest, Southwest, Europe, and Tunisia. She was a highly independent woman who was the first among her peers to cut her hair in a bob, the first to get divorced, and the first to smoke cigarettes. Her painting was influenced by European modernism, and many of them had large, abstract fields of color.

She studied at the Art Institute of Chicago and with Lucien Simon in Paris. Her work met with early success, and in 1913 she began exhibiting at the American Artists Club and the International Artists Union in Paris. In the United States, she exhibited at the Chicago Art Institute from 1915 to 1920 and had a one-woman show there in 1929.

In Tunisia, she attended the Institute de Carthage and there she received official recognition from that government for the quality of her art work. She divided her time between that country and Chicago.

In 1910, Sterchi first visited Taos, New Mexico, and from then exhibited paintings of New Mexico, especially at the Art Institute of Chicago. In 1938 and 1939, and from 1940 to 1962, she lived and painted in Phoenix, Arizona during the winters. She was a member of the Institute de Carthage, Chicago Art Club and Chicago Society of Artists