Born in Rockport, Massachusetts, impressionist painter William Stevens lived and worked in the area for many years. In the later part of his life, he moved to Conway, Massachusetts.

His first art study was with Parker Perkins, and then he attended the Boston Museum School as a student of Edmund Tarbell, Frank Benson, Philip Hale and William Paxton.  He taught at Princeton and Boston Universities, and by 1964 had won more awards than any other living artist.

Stevens, along with his friend Aldro Hibbard, was instrumental in organizing the Rockport Art Association in 1921 with the goal of making art more accessible to common people. Later in his life Stevens also organized the Conway Festival of the Hills and the Berkshire Arts Festival.

Stevens was a member of the Boston School, traditionalists and impressionists, opposed to abstraction in art.  The subject matter was usually landscape, views of everyday life, and portraits.  William Lester Stevens died on June 10, 1969. 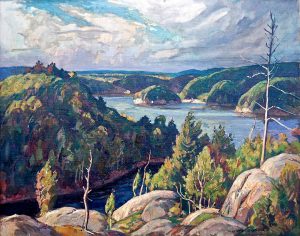