Hudson River School style landscapist and genre painter James Crawford Thom was born in New York City in 1835, though he grew up on a farm just north of the City in Ramapo, New York.  He studied at the National Academy of Design in New York City as an eighteen-year-old before going to Paris, where he studied with Camille Corot, Thomas Couture and Henri Picou.  He also studied with Pierre Edouard Frere whose paintings of children and peasants in the countryside seem to have influenced Thom, known for his pictures of children out-of-doors.

A seven-year interlude in London, 1866-1873, led to exhibitions and increasing awareness of his work there, and in the latter year to exhibitions in America that encouraged the artist and his family to return to New York City.  They later moved to Atlantic Highlands, New Jersey, where the artist died of pneumonia in 1898.

In 1983, nearly one-hundred years after his death, an exhibition of James Crawford Thom’s work was held in East Brunswick, New Jersey.  His paintings may be seen in the National Museum of American Art, Smithsonian Institution in Washington, D.C. 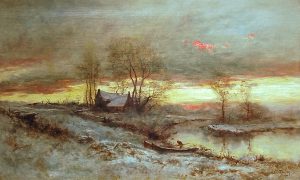