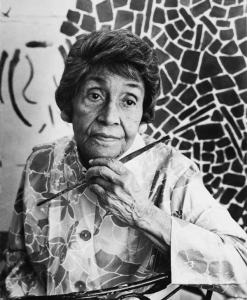 Known for her exuberantly colorful canvases filled with abstract shapes and patterns, Alma W. Thomas had her first one-woman show at the age of 68, after retiring from a thirty-five year teaching career.  She accomplished many ‘firsts’ in her lifetime: in 1924, she was the first graduate of the Fine Art Department of Howard University; in 1934, the first African-American woman to gain a Master’s degree in art from Columbia University; and, 1972, when she was 80, she was the first African-American woman to have a solo show at the Whitney Museum of American Art.

Thomas was born and raised in Columbus, Georgia.  In 1907 she moved with her family to Washington, D.C., into the house where she spent the remaining seven decades of her life.  After graduating from high school, where she excelled at art, Thomas earned a teaching certificate and, later, a master’s degree in art education.  Throughout her life, Thomas concentrated on her art; she painted part-time while supporting herself by teaching, mainly at Shaw Junior High School in Washington D.C., where she worked from 1924 until her retirement in 1960. She attended classes at Columbia during the summers in the 1930s, and at American University in the 1950s.  She was active in the Washington art scene, and helped establish the Barnett Aden Gallery and was involved with ‘The Little Studio’, a group of artists who gathered to exchange ideas and critique each other’s work.

Her work reflects a long study of color theory, watercolor, and abstraction, and even exploration of costume and marionette design.  Thomas’s early art was realistic, but while at Howard University she became fascinated by abstraction, based on the influence of her professors Lois Mailou Jones and James V. Herring.  When she was invited to exhibit her art at Howard in 1966, at age 75, Thomas decided to experiment with a new approach, the type of painting for which she is best known today: large canvases filled with dense, irregular patterns made by brushes heavily laden with bright colors.  She found inspiration in trees and flowers around her, often as seen from the windows of her Washington D.C home, as they flickered in changing light.  She also liked to imagine seeing natural forms and patterns from a plane, and was fascinated by exploration of outer space.  Her works from the 1970s include titles such as Launch Pad and Blast Off.  Thomas’s mature work has been compared with Byzantine mosaics, to the pointillist technique of Georges Seurat.  She has been associated with the paintings of the Washington Color School, such as the work of Morris Louis, Gene Davis and other Color Field painters who were active in the area from the 1950s, yet her work is distinctive.

As a black woman, she encountered many barriers, but did not turn to racial or feminist issues in her art.  She believed the creative spirit to be independent of race or gender.  A lifelong political activist, Thomas offered weekly art classes to children from Washington’s poorest neighborhoods, cultivating their appreciation for art, even when she was suffering from severe arthritis.  In her 80s, neither a broken hip nor a heart ailment prevented her from continuing to paint.