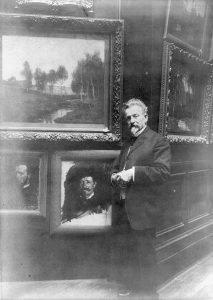 The story of Max Weyl’s life includes his evolution from a watchmaker too shy to hang his paintings in his own shop window, to finally doing so, and having a major collector see the work and buy it, thus launching the artist in Washington, D.C. But, in the end, Weyl would begin to copy his own, too successful landscapes.

Essentially self-taught, Weyl would draw on three major influences in his art, from Hudson River School through Barbizon School to the American painter George Inness.

Born near Wurttemberg, Germany in Muhlen-am-Neckar in 1837, Weyl was a watchmaker’s apprentice there, eventually opening his own jewelry store in 1861 in Washington after emigrating to the United States. He started painting flowers and still-lifes as a hobby, working on his art for the next ten years. Not until 1870, did he gather the courage to exhibit his work in his store window.

It was at that point that Weyl’s personal miracle occurred—the appearance of a wealthy patron who loved his work and was well connected. He was Samuel Kauffmann, President of the Board of Trustees of the Corcoran Gallery of Art, and publisher of the “Evening Star” newspaper. Kauffman, of all things, stopped by Weyl’s shop to have his watch repaired. He saw the artist’s paintings and bought a small landscape. That was the beginning. Kauffman continued to purchase paintings as the years went by, as did such Presidential wives as Mrs. Grover Cleveland and Mrs. Woodrow Wilson, who would buy and hang Max Weyl’s landscapes of the Washington, D.C. area in the White House.

Weyl still described himself as a jeweler and watchmaker until 1878, when he listed himself as an artist in directories. In 1879, he went to Europe to see the art in the museums. Financed by a successful first exhibition of his paintings, this experience precipitated the Barbizon influence (he came to be called the “American Daubigny” after the well-known Barbizon painter Charles Daubigny).

Weyl’s success and fame grew during the remaining twenty years of the Nineteenth Century, up to his death in 1914. The years of the Twentieth Century saw the influence of Inness in Weyl’s handling of light in poetic landscapes of the Potomac River marshes and Rock Creek Valley just outside Washington. It was the paintings of the latter subject that the artist eventually turned into a formula because of their popularity.