John Potter Wheat studied at the Art Students League at the Yale School of Fine Arts. He graduated with a Masters of Fine Arts degree.

His work under went through changes over the course of his life. He began painting in water color at the beginning of his career, and later painted in oil. When acrylic paint became available, he painted in this medium almost exclusively. He was also known for his lithographs. During World War II, he was a Corporal in the U.S. Army and worked for the Department of Strategic Services.

Wheat was known for his landscapes although he did paint portraits or figures infrequently. He went through a realistic period where he painted a great many barns, New England scenes and churches. Later he began using the palette knife and painting in a realistic/surrealistic manner. He painted murals throughout his life- for the OSS in WWII and murals relating historical events. South Central bank in Keokuk, Iowa has a huge mural by Wheat depicting the city’s role in the westward expansion of the country. He also painted numerous murals depicting historical events for movie theaters and other venues. He very meticulous in his depictions of dress, equipment, etc. in his paintings, murals because he wanted to be absolutely true to the historical time.

In 1968, he was commissioned by the army to paint the Vietnam War. He was the official combat artist in Vietnam for the Office of the Chief of Military History, Department of the army. He was in Vietnam from November 16th, 1968 until December, 16th, 1968. Twelve major paintings and 160 drawings were accepted by the U.S Army Historical Collection on January 1st, 1970. 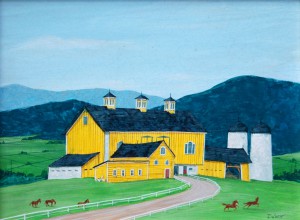