John Williamson was a versatile artist who created still lifes, genre scenes, and landscapes during the heyday of the Hudson River School. Born in Scotland, Williamson came to the United States with his family in 1831. He spent most of his life in Brooklyn, New York, studying art at the Brooklyn Institute and helping to found the Brooklyn Art Association.

Williamson was particularly drawn to mountain scenery and made frequent painting trips to the Adirondack and Catskill Mountains, as well as the Berkshire Mountains, White Mountains, and Green Mountains of New England. His intimate, poetic views drew from the atmospheric style of the Luminists and bear comparison to the works of John Frederick Kensett and Sanford Robinson Gifford.

In the mid-nineteenth century, his vivid depictions of nature earned a great deal of recognition, and Williamson was named an Associate at the National Academy of Design in 1861. He exhibited there regularly, and featured his paintings at the American Art-Union, the Utica Art Association, and in galleries throughout Boston and Washington. His work is now in The Brooklyn Museum of Art, the Hudson River Museum, and the Maier Museum of Art, among other prominent institutions. 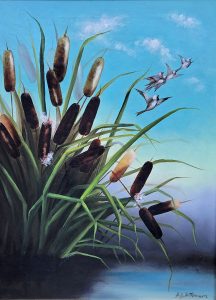